Truth is a Gentlemen’s Agreement between two people, neither of whom are gentlemen, neither interested in honesty. Instead, these people are simply polite fictions dressed up in spats and a pince-nez, only half-listening because the other half of their attention is focused on how much damage can be caused by what is being shared.

My mom is 73 this year, pocked with Alzheimer’s, haunted by ghosts and it can be tough to suss out from her various descriptions how many are phantoms of the mind, how many are figments of her imagination, and how many, if any, are visitors from some past Other Side. If they have a message for her, it must be frustrating. She won’t remember it. “Well, your brother Michael’s dead,” she explained to me. This was after she and I had talked on the phone earlier that day.

I’m going to tell a story about her, and it’s a Gentlemen’s Agreement story where we’re going to agree, thee and me, that I am telling you the truth.

My mom was born in 1945 in Leola, Arkansas, and you’re right, you probably have never heard of it. As of 2010 it had a population of 501. It’s known, if it’s known, and it’s not known, so I’m only using an idiom, for Cox Creek Lake, created in 1964 by damming a tributary of the Saline River. According to my mom, an uncle molested her in that river, holding her afloat with one hand and threatening to drown her. 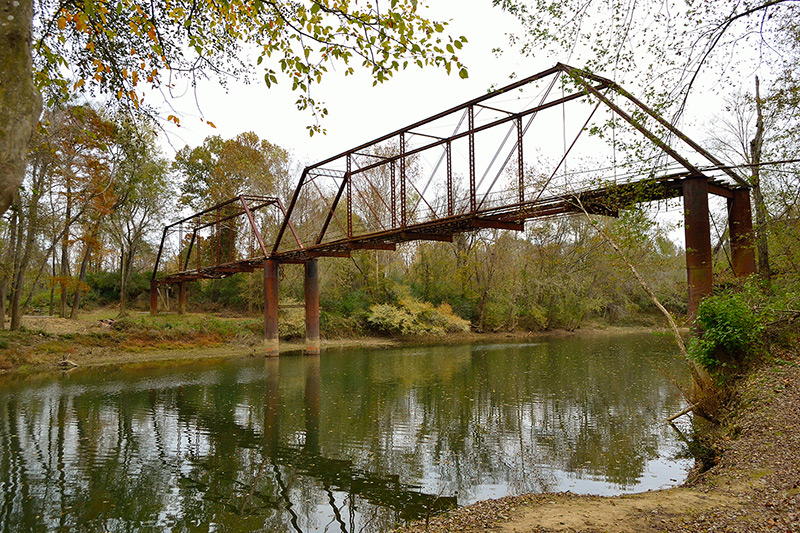 That sounds terrible, I remember telling her, and she said, “Eventually. I didn’t know how to understand it.” She was six.

My maternal grandparents were (are?) (no, were, they’re both dead) a man named Edward Clinton Kelly and a woman named Flossie Laverne Badgett. He was Irish, with seven sisters who lived in a rundown house on the outskirts of Leola, which is already on the outskirts of Malvern, itself an outskirt of Little Rock. It’s like sinking into the Saline River. The sisters refused both indoor plumbing (“not safe”) and electricity, even when the electric company came through to wire every house with incandescence. They lived simply, by candlelight and oil, firelight and the sun. Come evening, the house would curl itself catlike into the darker undergrowth that surrounded it.

I asked my mom once why the sisters didn’t have electricity. “It’s so the Devil wouldn’t be able to see them at night,” she explained. “But what if he brought his own light?” I asked. “He doesn’t have his own light. He lost that when he fell to earth.” Now he preys on us here, in this world, she continued, always looking into windows to see who had a light, like we did. “That’s how he finds you. The sooner you turn the light off at night, the sooner you won’t be visited by the Devil in your bedroom.” I was six.

My mom grew up Southern Baptist because it was Arkansas and everyone in Arkansas was either Southern Baptist or dead. Her grandmother was a Pentecostal named Chloe Badgett. Her church didn’t meet always in a building. It met by the Saline River often throughout the summer, baptising members and non-members, each dunk as sweet as the one that came right before. It was as if they were aspersoria, hoping to fill themselves to the cap with duckweed and Christ’s power.

(My Uncle Thurston told me, when I was 11, about a dam built on the Saline River, in 1964, the one that ultimately created Cox Creek Lake. I was too young to notice any wink in an adult’s eye; never knew lies could be funny. “There are catfish at the bottom of that dam big enough to swaller a man,” he said, gravely, and I have been terrified of water ever since and yet one must be baptized, I guess, if one is to be truly saved. Washed clean of sin, held down by enormous catfish until I drown.)

These Pentecostals also handled serpents and drank — or, rather, sipped — poison, based on the Good News revealed in Mark 16:17-18,

And these signs will accompany those who believe: in my name they will cast out demons; they will speak in new tongues; they will pick up serpents with their hands; and if they drink any deadly poison, it will not hurt them; they will lay their hands on the sick, and they will recover. 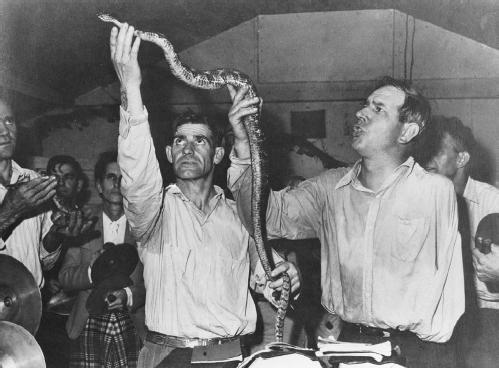 I asked my mom if she ever saw Great Grandma Badgett cast out a demon. I was fascinated with the idea. Would you see it ricochet out of the soul of the possessed? Would some furry, cloven-hoofed monster crawl out of the throat and scuttle crablike across the floor? “No,” mama said, “she never cast out demons.” Grandma Laverne, who was still alive then, nodded. “She could have, but she ain’t.” I think Grandma Laverne was in her own kitchen at the time, grinding up ice for iced tea. “I did battle the Holy Ghost on the laundry porch once,” she said. Mama looked at me and then past.

When my mom was born, my grandma was 29 and my grandfather was 70. This’ll be more important in a second only just now I’m going to correct the record.

For years, when I’ve told this story, about my mom, and religion, and why my brother and I didn’t have much of it growing up, in my version of this Gentlemen’s Agreement my grandpa was in his mid-80s when my mom was born, and my grandma was in her mid-20s. While doing only the barest of research for this piece, I learned a bunch of other dates, like that Grandma Laverne was born in 1916, that her husband, Edward, with the weird sisters, was born in 1875. I had thought he came here from Ireland, but according to Ancestry.com he was from Arkansas. His father, however, was Irish, and those Kellys became farmers here, or sharecroppers, rather, and carpenter assistants. I also learned that my grandfather was married before, to a woman named Lizzie, who died the year after Laverne and Edward had their first child, a son named Hubert. 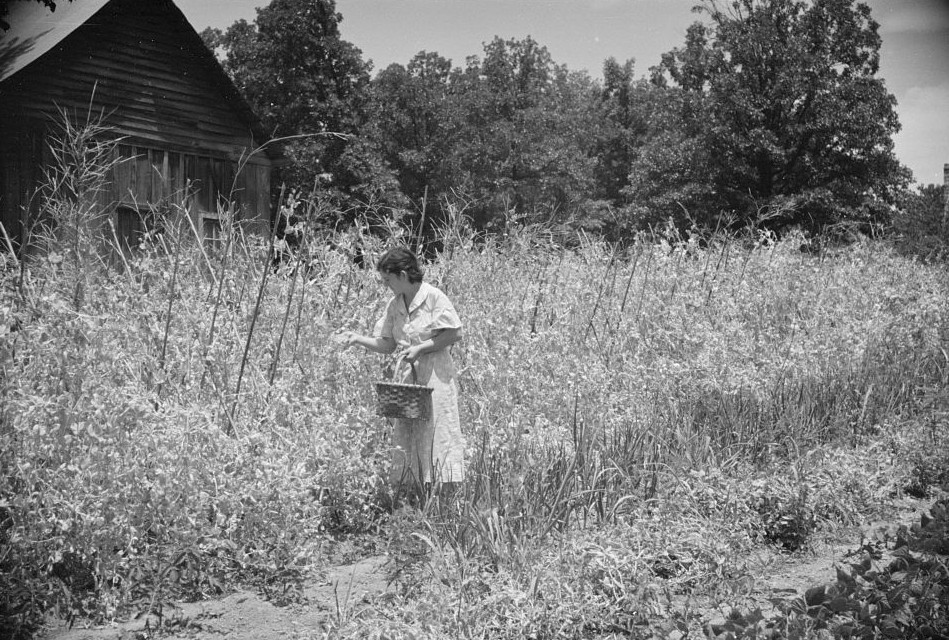 Family stories aren’t ever for true. They’re for instruction, or comfort, or explanation. What does it mean to know anything anyway? There’s what’s true, and what works, and we aim for the middle, or we don’t aim at all.

Because my grandfather was 70 when my mom was born, and because Great Grandma Badgett had been ordered by God to handle serpents, drink poison, cast out demons (even though she ain’t’ed yet), and heal the sick, she decided that my mom must be a product of the Devil, that it wasn’t the Holy Ghost her daughter battled on the laundry porch. In her heart, 70 was too old for a natural child to be born. There was something unnatural about my mom.

“Did you ever feel unnatural?” I remember asking her. Most stories about her past were slurred to me late on school nights, when she’d have too many cans of Coors and no one else to talk to. That’s how I learned about the river molestation. Or the first of her three marriages. I learned that I wasn’t a wanted child, and that she had tried a bunch of ways to abort me without, you know, aborting me. She would tell me, “Michael, when you boys are out of the house I will kill myself. I won’t be needed any more.” And I believed her, because we’re supposed to believe our parents. And now, mid-70s, she doesn’t remember this plan at all because she doesn’t remember anything. A little girl cries sometimes in the bushes, she says, outside her bedroom.

“Did you ever feel unnatural?” I ask, and she says, “No. I knew I was, but I never felt I was.” How did you know? I asked her. “Because Grandma Badgett told me,” mama said. “She talks directly to God.” Isn’t she dead now, though, I ask? “It would take more than death to keep her quiet,” mama said, and she shuddered.

My Great Grandma Badgett tried to kill my mom the summer my mom was three. There was a large cauldron for boiling blood when the hogs were slaughtered, I’m told for puddings and sausage and if it turns out that none of the Ireland stuff is true then I will have dodged a bullet because Irish food sounds terrible. Great Grandma Badgett filled it with water, built up a fire, and read from the Book of Acts and the Book of Revelations. (This part is the Gentlemen’s Agreement; I don’t know what she read from the Bible or if she read from the Bible. The rest is true, if also gentlemanly agreeable.)

Great Grandma Badgett’s plan was to boil the Devil out of mama. He could not be cast out or frightened by snakes. Poison and the laying on of hands was no good, either. The smell of meat, mama would say, is pleasing to the Lord. “That must be where she got it.” Sometimes when she talks about it, she is talking about it to explain forgiveness: What if the Devil had been responsible for her birth? What if Great Grandma Badgett was all that stood between the righteous and unrighteous. The Bible itself is filled with iron-willed women; couldn’t there be room for one named Chloe?

Other times, though — and, actually, most times — what I’m hearing is a survivor who didn’t make it. Jean-Paul Sartre wrote a short story, “The Wall,” in 1939. Several men are condemned to death, to be killed by firing squad. What Sartre wants to explore is when do we die? There is an easy answer: when something kills us. And then there’s the uncomfortable answer, which is: any time at all.

I believe mama died in that pot. I believed any sense of care and safety and protection and love were plunged out of her. I think she was three, and afraid, and in thrall to a woman who was also far too young for the task she assigned herself, and also, too, afraid.

What happens next changes. She’s never told me the same story twice. So I’ll tell my Gentleman’s version, and that will have to do.

The mailman, on his daily route, passed by and saw a woman in her early 50s struggling with a child not yet not a toddler. He saw the older woman pick the child up, and saw that woman carry that child, kicking and crying, to a pot, suspended over a fire, by chains. He saw all this and he…did nothing. He tipped his cap towards Great Grandma Badgett, and my mom watched him leave.

Where Grandma Laverne was in all of this is never clear. Sometimes mama says she had gone to town for supplies. Sometimes, she’s just sort of not there, until she is, until she comes home and sees her own mother trying to boil her own granddaughter to death.

I want to the story to end heroically — Grandma Laverne tells Great Grandma Badgett, in no uncertain terms, that she’s to take her hands off of her daughter, and to leave that house, and to never return. I want this to resurrect my mom from the death I imagined for her at age three. I want my mom to only feel love and know safety after this.

Wolf Hall is the best book ever written in the English language. Flannery O'Connor is always right. I miss Gerard Manley Hopkins. I live, laugh, and love in Rockville, Maryland. View all posts by Michael Bevel