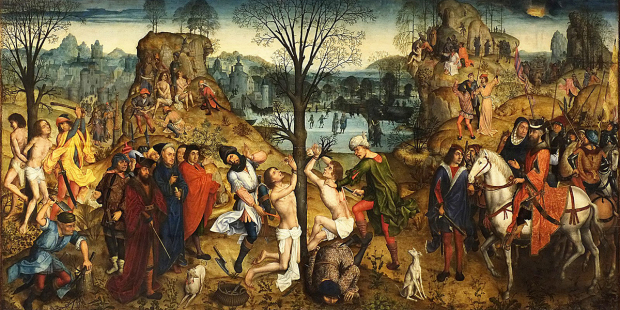 In one version of the story these Saints Crispin preached the gospel to the Gauls, made shoes at night, gave money to the poor, and were martyred — almost drowned, then beheaded. But there are no tigers in Africa and there was no Christian persecution in Gaul; however, both are very beautiful in the way false things lead to true understanding in the end.

(Rictus Varus, who probably didn’t exist, and who ordered the execution that probably didn’t happen, in some stories is converted, too, to Christianity, and then martyred, though, of course, probably not. In some stories, he is persuaded to devote his life to Christ, before being beheaded for this newfound faith, which is fitting, if it’s true, if being the key, as he is the Catalyst to Grace in several other martyralia. Ways lead on to ways; saints lead on to saints.)

In some versions of the story, they are Romans and brothers, twins, but there’s no support for this, other than one time my brother thought Corey Haim and Corey Feldman were brothers, and this feels of a piece with that. Aert van den Bossche paints them as brothers in a broad canvas with martyrs as far as the eye can see, in amongst scenes of gorgeous velvet fashion and ice skating. In the painting they all seem to be Crispins, except when they’re dogs.

My favorite version of the story, though, is this: Rather than Romans, they’re Englishmen, living in Canterbury. Walking one day — maybe their father has been murdered, as one story goes; maybe they’re just perambulators, England being lovely to walk through, they’re on a pilgrimage of their own — they happen upon a cobbler’s workshop ten miles from home, in Faversham, where they stay, entirely content, not being martyred, learning to make shoes.

We band of brothers.

Wolf Hall is the best book ever written in the English language. Flannery O'Connor is always right. I miss Gerard Manley Hopkins. I live, laugh, and love in Rockville, Maryland. View all posts by Mike Bevel