It can be tough to keep up with Bibiana’s mother’s head.

In one story, she, Dafrosa, keeps it, squarely on her shoulders, where one expects a head to be. She dies, as happens, how, we don’t know, and Bibiana buries her inside their house, next to the body of her sister, who died too. After being martyred, Bibiana is also buried in the house, next to her mother and sister, so that now the house is too full of corpses and it will be tough to sell, one would imagine, to a family interested in a finished basement.

In another, however, Bibiana’s mother is beheaded after her husband is sent into exile, all over something as silly and important as Christian belief. (Julian the Apostate is behind all this buttoning and unbuttoning; in any story about Bibiana he is the one constant. He was a pagan, “but in a cool way, like, intellectually, not just a guy with runes who likes to recycle.”) Dafrosa is beheaded, and Bibiana and her sister Demetria are stripped of everything but their own hunger and their own virginity — which is more than a little at a time when virginity oh who am I kidding, virginity holds its value even up unto today.

Both Bibiana and her sister are dragged before Julian to repent of their devotion to the One True God, but they don’t. Or can’t, both are starving and can barely stand in front of the crowd. Demetria gasps out her love of Christ, and dies immediately afterwards, so no sainthood for her, since death came too easily. 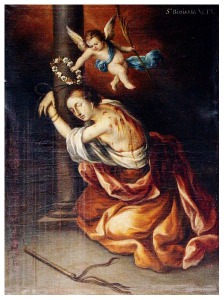 It gets worse for Bibiana:

A lesbian named Rufina attempts to seduce her, moves on to beating when seduction won’t work, before finally sending her to be scourged to death by a whip with lead plummets.

(We’re told a man named Apronianus, whom Julius named governor, lost an eye, one assumes carelessly, I mean, how could it happen, save through sheer unwatching, but nevertheless and blinded in one eye it was Apronianus who began the Christian persecution, confusing them with witches, because of the power of prayer.)

Bibiana is the patron saint of hangovers.

Wolf Hall is the best book ever written in the English language. Flannery O'Connor is always right. I miss Gerard Manley Hopkins. I live, laugh, and love in Rockville, Maryland. View all posts by Michael Bevel